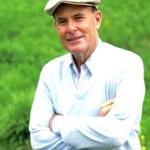 In 1959, the area on the southwest corner of Olive Branch Road and State Road 135 was farm land. But real estate developers Henry and Bill Nordsieck wanted to turn it into a planned community with a golf course. The Nordsiecks could handle the neighborhood. But for the golf course, they turned to Pete and Alice Dye. At the time, Pete was a former insurance salesman working at the Country Club of Indianapolis and Alice was an Indiana amateur golf champion. El Dorado Country Club (as it was originally called) would be their first golf course design.

“It was a partnership from the very beginning,” Alice explains about her and Pete’s design process and division of labor. “We laid out the holes and we talked about it together. We had a dining room table, and we’d cut strips of paper and laid them out on the map and talked about the best arrangement.”

The Dye's created plans for 18 holes but only completed nine – what are today holes 10 through 18. The #10 tee was right next to a small cemetery. Asked if starting a golf course right next to a burial ground gave him pause, Pete Dye responded, “I’ve built more golf courses around cemeteries – I think they haunt me.”

Much has changed since the private club opened in 1961. A second nine was added in the early 1970’s by Indianapolis golf course architect Ron Kern (the Dye's were living in Florida by then and weren’t asked to complete their original design). The name was changed from El Dorado to Royal Oak in 1987, then to Dye’s Walk in 2007. The private club filed for bankruptcy in 2011 but has emerged as a member-owned club and is seeing a resurgence.

Mike Abdalla, a member of the Dye’s Walk Board of Directors, talked about how the club made the transition from for-profit private ownership to a member-owned not-for-profit structure.

“A consulting company explained that the rate of failure of privately-owned clubs is extremely high compared to that of member owned,” says Abdalla. He goes on to explain that during the bankruptcy process “it was the intent of the bank to sell the club back to the members in about 3 years." The members bought the club sooner and short-circuited the process and made it happen quicker.

With around 365 members at last count Dye’s Walk offers several membership levels: Family, Single, Corporate, Jr. Executive, Military, Widow, and Honorary. The club also boasts a very active female membership. “The women have their own club within the club,” says Abdalla. “They have a president, vice president, and treasurer. They organize their own tournaments as well as fundraisers and social events.”

Dye's Walk isn't just about golf. The club is often available to the public for indoor or outdoor weddings and receptions, graduation parties, reunions, and private parties of any kind. Finally, Abdalla succinctly explains the benefits of a Dye’s Walk Country Club membership: “It’s a year’s worth of entertainment for the cost of one family vacation.”